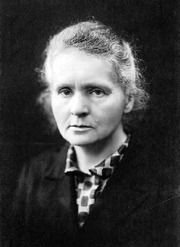 Marie Curie, Polish-French Chemist and Physicist, famous for her pioneering work on Radioactivity.

Marie Skłodowska Curie (7 November 1867 – 4 July 1934), was born in Warsaw, Poland. She was a chemist and physicist famous for her pioneering work on radioactivity.  She was married to a fellow scientist, Pierre Curie. Madame Curie was the first person honored with two Nobel Prizes – in physics and chemistry.

She was the first female professor at the University of Paris and the first woman to be entombed on her own merits (in 1995) in the Paris Pantheon.

A biographical film made by MGM entitled Madame Curie was produced in 1943 on the life of Marie Curie, adapted from the biography by her daughter, Eve Curie.

Interested readers may want to check out my related articles:  Marie Curie Biography  and Radioactivity at a Glance